For us Budapest is like a timeless lady who mixes fun and elegance. And like a good wine, it improves with age! So we decided to look back on the last decade and see how the city has changed. This is our interpretation of the Budapest 10-year challenge.

So many of our guests remember a previous trip to Budapest from a decade or two ago. And they are shocked that they can hardly recognise the city nowadays! The main reason? After so much time spent as a sleeping beauty finally renovations are catching up. Before 1989 Hungary did not spend too much on pretty buildings, but since the ’90s we are slowly getting there.

The newly renovated facade of the Brudern House – a real gem

Some of the buildings that got a face lift since 2009:

These gorgeous places will soon get rid of the scaffolding:

The Rumbach Synagogue – the renovation outside is finished, they are still working on the interior

And we also got a few modern additions:

In the past 10 years Budapest became a gourmet heaven. Our chefs have started to travel the world and bring home inspiration from the best of the globe. The first restaurant to get a Michelin star in Hungary was Costes in 2010, and since then the number of stars was growing almost every year. At the moment there are four Michelin awarded restaurants in the country, and one of them, Onyx has 2 stars! It’s a really big deal for a post-communist, Central European country y’all!

Not to mention the prestigious Bocuse d’Or competition. It was already a big deal when Hungary organised the European edition in 2016. But when Tamás Széll and his team got the gold medal honestly I was more proud than for any of our Olympians.

The amuse bouche selection of Stand restaurant, the new place of Széll Tamás and Szulló Szabina

And of course it’s not just the fine dining that evolved. Quality trickled down to all levels. It’s really easy now to find excellent “fast food” options as well, like real Italian pizza by the slice or modern style sausages made from scratch for five euros. The Hold street Market Hall became the mecca of gourmet lunches – we wish they were open for dinner time as well!

Our guests enjoying modern Hungarian cuisine on our Food Tour

Ten years ago it was nearly impossible to find a decent breakfast place, and now they are all over. Weekend brunches became a thing, and locals love them!

Oh and one more thing: it is much easier to find vegan options now, and the awareness for food allergies has grown immensely. You can even take a Vegan Food Tour with us!

Yes, it has to have its own paragraph. Hungary picked up on the specialty coffee culture in the last 5-6 years, and now you can find it everywhere. Actually this is the reason why I started to drink coffee at all. And it’s not just about the coffee shops, we have excellent roasteries, too! They import the best beans from ethical producers and roast the coffee to perfection.

A beautiful cappuccino at Double Shot, a great specialty coffee shop in Budapest

And of course where there is good coffee there is also good pastry. Nice sourdough bread is now the norm, and the croissants can rival those from Paris. (But when in Hungary make sure to try the local favourite: a cocoa snail or kakaós csiga.) Okay, now I’m getting hungry.

If you are interested in the century-old coffee house culture and also the modern specialty coffee scene don’t miss out on our Coffee Tour! The best remedy against jet lag as well.

Ten years ago it was nearly impossible to buy good sourdough bread and pastries in Budapest, now it’s more and more popular

Budapest is famous for its efficient public transportation. And we have to admit, despite all its flaws, it has improved even more in the last decade.

One of the stations of the newest metro line of Budapest

We have a brand new metro line, the M4. Maybe one of the most expensive constructions of all times, but at least the stations are a work of art! And it makes getting to Gellért Baths or the Rákóczi Market Hall much easier.

Budapest introduced the public bike system, the Bubi. (Read our how-to instructions in this blog post.) In general biking became easier and more accepted in the city, and hopefully the infrastructure will be even better in the next years.

Bubi is a public bike system in Budapest

It’s also easier to get to the Budapest Airport now with the 100E bus. It’s an express bus that runs directly from the city centre and only costs 900 forints (3 euros).

Walking also became more convenient: there are new pedestrian areas in the city centre. One of our favourite things to do in summer? Sit on the terraces with a wine spritzer and watch people pass by. We always recommend our guests to book a walking tour: it’s the best way to soak up the atmosphere of a city and to notice the little details!

Also great news: the public transportation company runs boats on the river now. This is the most economical way of enjoying a cruise on the Danube, and they also go further up north than the touristy versions.

The Rudas Baths seen from a boat on the Danube

And the Little Things

All in all, our beloved city is getting more and more beautiful every year. In the last ten years our firewalls started to dress up in colourful murals – especially district 7 has a strong street art game.

Colourful (and interactive!) mural in district 5

There are more and more farmers markets besides the traditional market halls. Bars like the famous Szimpla Kert fill up with fresh veggies and artisan cheese once a week.

Hungarians have also started to discover the zero waste movement, there are now three plastic-free shops where you can buy your groceries, and several bars and restaurants have joined the Felelős Gasztrohős sustainability movement.

There are lots of civilian groups trying to help those in need. Heti Betevő for example cooks food once a week for hundreds of hungry people. If you wish to donate to them look for their jars with a yellow and white label in many bars – or if you happen to live in Budapest you can also help with your time.

Miniature sculptures started to appear everywhere thanks to the artist Mihály Kolodko. Most of them just pop up from one day to an other as a surprise, while some are officially commissioned like the tiny Franz Liszt at the airport.

Were there any bad changes? Well, sure. But let’s focus on the positive here.

We are truly excited to see what the next decade will bring us. Compared to ten years ago the change has been enormous. So don’t hesitate to visit Budapest more than once! There will always be new things to discover.

Judit is the founder and guide of Budapest 101 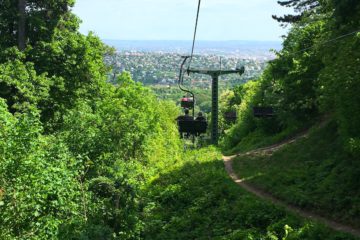 5+1 Unique Ways of Transport in Budapest

With its excellent public transportation system, it is really easy to get around in Budapest! But besides the ordinary buses and trams, you can find some unique or historical means of transportation as well. Here Read more

Sure, Budapest is our everlasting love. But no capital is the true representation of an entire country! We always encourage all our guests to discover some places beyond Budapest, and those who decide to do Read more

The Best Vegan Burgers In Budapest

The vegan scene is rapidly growing in Budapest, and the vegan burgers are so good that even beef fans choose the meat-free versions from time to time. Though a burger is not the most traditional Read more